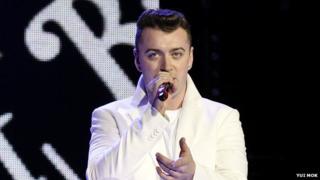 Singer-songwriter Sam Smith has won the Brits Critics' Choice award, which will be presented to him during next year's Brits nominations in January.

The award is open to artists who will release their debut albums in 2014.

He beat singers Chloe Howl and Ella Eyre to claim the prize.

Adele and Jessie J both won the same prize in the past.

Sam is set to release his debut single Money On My Mind in February with an album is expected in Spring.

He picks up his prize at the Brit nominations, hosted by Radio 1 breakfast host Nick Grimshaw, at ITV Studios on 9 January.

The Brit Awards take place at London's O2 Arena on 19 February; Katy Perry and Arctic Monkeys will perform at the ceremony.