Does chatting in class distract you? 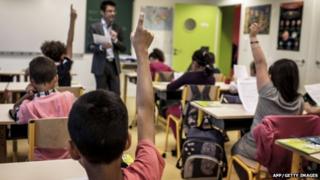 The head of England's education inspectors, Ofsted, says some schools are lagging behind because of disruption in class.

Ofsted has just published its annual report about education in England and it shows schools in some areas are performing much better than some schools in other areas of the country.

The report shows that eight out of ten schools are marked as good or better, but there are still around 250,000 kids taught in schools that aren't good enough.

Another 1.5million kids' schools need to improve, the report says.

Misbehaviour 'gets in the way'

Sir Michael Wilshaw, who is in charge at Ofsted, said more needs to be done.

He says one of the things holding schools back is that teachers aren't doing enough to stop disruption in classrooms, which "gets in way of good teaching and learning".

He said schools are too ready to accept misbehaviour, like pupils answering back to teachers, and it's preventing kids from learning properly.

There'll be unannounced school inspections to check on classroom behaviour, he said.

Ros McNeil, the Head of Education at the National Union of Teachers, said recent Ofsted inspections have shown that "Schools are improving hugely in pupil behaviour and generally, overall in most classrooms, actually behaviour is good and as it needs to be."

We asked you whether you think rowdy behaviour in class affects your learning - here's a selection of your comments below.

It distracts me because when I'm trying to work and people are talking I can't concentrate. My seats got moved in school because the person next to me started singing a song I liked and I could only join in. I quite often dream a lot in class, because there's lots of noise (and I'm a daydreamer!).

It really depends on how loud the chatting is and if children are listening to the teachers; however we go to school to learn, not chat!

I'm the goody-goody in my class but my friends aren't and they often get me into trouble for talking. It's good to know that our school takes it seriously though.

I strongly believe chatting should not be banned as it is constructive and if children are stuck they can show resilience by asking a friend, not asking the teacher. But I also feel that it should be banned during exams because they are so the teachers know what YOU can do, not your peers!

I don't really notice the noise any more! It's just part of school life. Some people may be more distracted by it though.

Talking helps me learn and I learn lots of new things by talking and it makes school more enjoyable.

At my school we are allowed to chat but if we get too loud our teacher tells us to be quiet. But I think you can still work whilst talking.

In our school we aren't allowed to chat but sometimes our teacher (she's nice) will let us talk. It does sometimes get in the way of learning though.

YES! They just talk about nothing and even bully some kids. Some people get up and start dancing in class or doing random stupid things like that and it's so annoying for those who actually want to learn. The only problem is that the teachers are WAY too soft on them and just let them get away with what they want.

I think chatting in class is alright to a certain extent but not to the point where the class is in chaos.

No it doesn't distract me. In class we are aloud to talk most of the time even about irrelevent things, and we still produce good work.

Chatting in class does distract me a lot, I'm trying to concentrate on my work but it's hard when all the other pupils talk constantly. When our school have Ofsted inspections the teachers finally step down on them but as soon as they leave it starts up again.

In my class they are always chatting too much and less work. It distracts me also my teacher sometimes forgets what she is saying.

I think that talking in class is bad because it can stop you from learning which is important and you can get told off for it.

I think chatting should be allowed in class on some occasions because in school there should be a social atmosphere but it is important you listen to get the information you need to know. I'm a bit in the middle.

We agree that chatting should be allowed but should never get in the way of our learning. In our class we have talk partners for all sessions and chatting is a 'constructive noise'.

I feel chatting in class can be distracting but on the other hand sometimes it can help you in lessons as you can listen to different ideas and help your class mates.

I think it does distract us and sometimes we concentrate on talking more than learning.

I think no because talking helps you understand more of the work.

In my primary school we do get some disruptions but not too much. I still think that chatting should not be banned because it takes away our freedom.

The whole of class 7 said that most of the chatting in class should be banned because it distracts other people and their learning. Whispering should be allowed whilst completing work but relevant to the subject.

We like chatting and still do good work. Maybe we do talk a lot though, but it doesn't get in the way.

I think you should ban talking in the classroom because if you're talking then you won't concentrate on the teacher. If you want to chat to your friends, do it at lunch time or break time. Besides, why do you come to school? You come here, to learn not to mess about in class.

I don't think you should be talking, because if you don't listen you won't do well in life and get a good job. If you don't have a good job you can't look after yourself.