Lake on Mars could have supported life, say Nasa 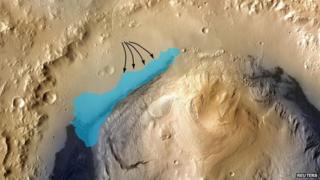 Photos and other info from Nasa's Curiosity Mars rover suggest a crater on the planet once contained water which could have supported life.

Curiosity drilled into the Gale crater - a 90-mile-wide hole created when a meteor hit the planet about 3.7bn years ago - and found fine clay minerals.

Scientists say those minerals could mean that a freshwater lake existed there for more than 100,000 years.

'Similar to the Dorset or Devon coast line'

"The presence of these minerals tells us the water was likely to be fresh water, which means it's much more conducive for microbial life," said Sanjeev Gupta, a geologist at Imperial College, London, and a member of the Curiosity science team.

"These rocks are similar to those we would find if we walked along the Dorset or Devon coast line," he added.

Writing in the journal, Science, researchers explain that the conditions in the lake were well suited to support a type of microbial life called chemolithoautotrophs.

These organisms are found on Earth deep underground, in caves and at the bottom of the ocean. They survive by breaking down rocks and minerals for energy. 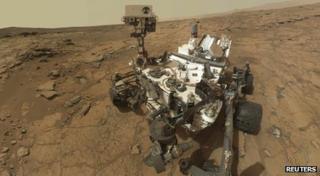 Nasa's Curiosity rover landed on Mars in August 2012 on a mission to explore whether the planet may once have been liveable.

Curiosity is currently driving towards the foothills of the mountain at the centre of the crater.