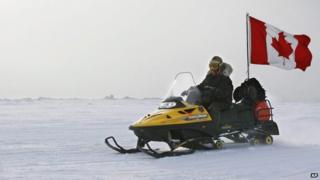 Canada plans to make a claim that the North Pole comes under their territory, according to the country's foreign affairs minister.

The Canadian government has asked scientists to determine how far the country's continent extends under the Pole, which is currently claimed by no-one.

The results of the survey will be submitted to international organisation, the United Nations, for consideration.

Currently, under international law, Canada, Denmark, Norway, Russia and the US - the five countries with territories near the Arctic Circle - are allotted 200 nautical miles from their northern coasts.

The Arctic is full of resources and shipping routes that could benefit the country if they can claim ownership.

A US Geological Survey says the region contains 30% of the world's undiscovered natural gas and 15% of oil.