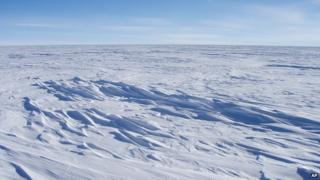 This is an initial figure too - the actual air temperature at the time may turn out to have been even colder, researchers say.

Before this, the lowest temperature recorded was -89.2C, at the Russian Vostok base on 21 July, 1983 in Antarctica.

"These very low temperatures are hard to imagine, I know," said Ted Scambos from the US National Snow and Ice Data Center in Boulder, Colorado.

"The way I like to put it is that it's almost as cold below freezing as boiling water is above freezing."

"It makes the cold snap being experienced in some places in North America right now seem very tame by comparison," he told BBC News.

He's been examining the data records from polar orbiting satellites for more than 30 years.

They find the coldest moments in Antarctica happen in the dark winter months, where the extremely dry and clear air allows heat to be lost to into space.

One of the spacecraft instruments being used in the study is the Thermal Infrared Sensor on the recently launched Landsat-8.

But because it is so new the team says more time is needed to fully understand its data.

The hottest recorded spot on Earth - again by satellite sensor - is the Dasht-e Lut salt desert in southeast Iran, where it reached 70.7C in 2005.

Neither of these discoveries will be making it into the Guinness Book of World Records yet though, as the scientists say the numbers may have to be adjusted over the coming year and could be more or less than already recorded.