Riot police take up position in Ukraine after weeks of protests

Riot police have taken up position in Ukraine's capital city, Kiev, after two weeks of protests and mass demonstrations against the government

Hundreds of thousands of protesters, who want the president to resign, have camped out in the central square in Kiev, despite freezing weather conditions.

They're angry because the government decided not to sign a deal with the European Union, which would give Ukraine closer ties with Europe, something they believe would give Ukrainians a better life.

But President Viktor Yanukovych, and many other Ukranians, want to remain close to Russia, and think signing an EU deal would put this at risk. 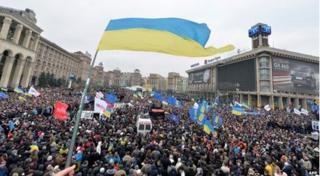 Since then there has been a tug of war over how the country should be governed.

On Sunday, protesters pulled down a statue of Russian revolutionary and former Soviet leader, Vladimir Lenin in the biggest protests seen so far. 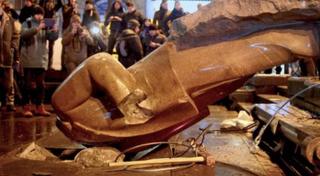 Reuters
This statue of Russian revolutionary leader, Lenin, was knocked over by protestors

President Yanukovych has agreed to meet former presidents tomorrow to try and find an agreement that will bring an end to the tense situation.