Lily Allen returns to number one in UK singles chart 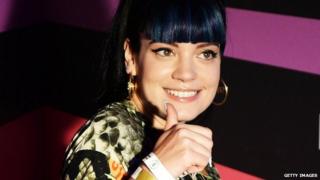 Lily Allen is back at the top of the UK singles chart with her cover version of Keane's Somewhere Only We Know.

The song, which is in a festive television advert for shop John Lewis, is tipped to be Christmas number one!

In the album chart, One Direction are at the top for a second week with Midnight Memories.

She was just beaten by Britain's Got Talent finalists Richard And Adam, whose Christmas Album came in at number 24.

It was a poor week for high new entries on both charts.

Struggling to beat Lily Allen in the singles chart were One Direction with Story Of My Life, Bastille's Of The Night and last week's number one, Under Control by Calvin Harris, Alesso and and Hurts.

The 27-year-old Liverpool singer-songwriter shot to fame in 2010 after becoming the runner-up on that year's X Factor. Her new album, Freedom, charted at number six.