Day of prayer for Nelson Mandela 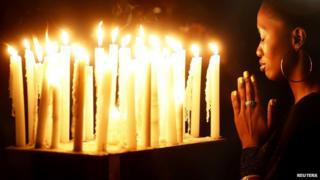 People in South Africa are holding a day of "prayer and reflection" for former leader Nelson Mandela.

World leaders including David Cameron and Barack Obama, will attend a national memorial service on Tuesday in the Johannesburg football stadium.

Click here to read our guide on why Nelson Mandela was important.