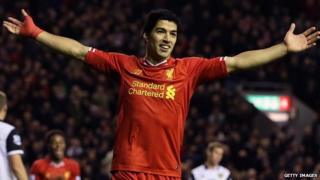 The Reds beat Norwich 5-1 in the match at Anfield.

A late goal from Brian Oviedo sent the toffees up to fifth and Man U down to ninth in the Premier League.

Chelsea beat Sunderland 4-3, and Man City are up to third after a 3-2 thriller against West Brom.

Fulham stayed in the bottom three after losing to Spurs. It was new boss Rene Meulensteen's first match in charge.