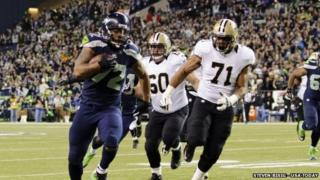 Some American football fans were so raucous on Monday that they registered as a minor earthquake, a research group has said.

Fans jumped up and down after a touchdown at a match between Seattle Seahawks and the New Orleans Saints.

The Pacific Northwest Seismic Network (PNSN) detected vibrations that measured between a magnitude one and two quake.

The match took place in Seattle in the US state of Washington.