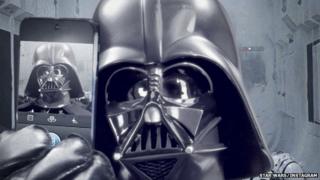 Star Wars have launched an official social media account by posting a selfie of Darth Vader.

Within 12 hours of posting the first image, the Star Wars account had gained just under 60,000 followers.

The new film, Star Wars: Episode VII, will begin shooting at Pinewood Studios in the south east of England, early next year ahead of an expected 2015 release.

Disney has been holding open auditions around Britain for the new film.