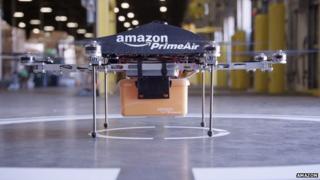 Imagine ordering something online, then half an hour later, it's dropped off for you by a mini-drone.

It might sound like science fiction, but online retailer Amazon said it's currently testing out the delivery method, and hopes to bring it to its customers in the next five years.

Amazon says the 'Octocopter' drones could deliver items to customers within 30 minutes of them placing an order.

But US and European law doesn't yet allow drones to be used this way.

In America it's expected that laws will be introduced in 2015, while much of Europe is to get new laws covering drones in 2016.

Amazon boss Jeff Bezos said in an interview on American TV that the company is ready to roll out its drone delivery system, known as Prime Air, as soon as those laws are in place.

Will they be safe?

However, some UAV experts (Unmanned Aerial Vehicles) say more needs to be done to make sure the drones are safe before laws can be passed.

Dr Darren Ansell, a UAV expert from the University of Central Lancashire said: "The UAVs do not currently have the awareness of their environment to be able to avoid flying into people.

"To deliver goods to people's homes for example in residential areas, the UAVs must overfly densely populated towns and cities, something that today's regulations prevent.

"Other things to consider are security of the goods during the transit. With no one to guard them the aircraft and package could be captured and stolen," he said.

An Australian firm called Zookal, that delivers textbooks for rent, announced earlier this year that it would start using drones to make deliveries from 2015 if approved by Australia's Civil Aviation Safety Authority.