Big pile of fossilised poo has been found in Argentina 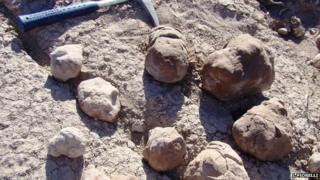 A gigantic "communal latrine" created at the dawn of the dinosaurs has been unearthed in Argentina.

Thousands of fossilised poos left by rhino-like mega herbivores were found clustered together.

The 240-million-year-old site is the "world's oldest public toilet" and the first evidence that ancient reptiles shared collective dumping grounds.

The dung contains clues to prehistoric diet, disease and vegetation.

Several different types of dung were found at the prehistoric toilet.

Fossil poo called "coprolites" as wide as 40cm and weighing several kilograms were found in seven massive patches across the Chanares Formation in La Rioja province.

Some were sausage-like, others were oval shaped and they ranged from whitish grey to dark brown-violet.

It's thought the animals all went in the same area to mark their territory and stop the spread of disease. 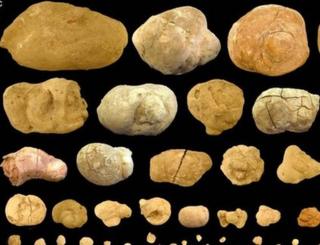 A museum of poos has been created by the researchers

The fossil poos are like time capsules which show scientists a lot about the animals which used the dung site.

Martin Hechenleitner who has studied the site said:

"When cracked open they reveal fragments of extinct plants, fungi, and gut parasites."

"Each poo is a snapshot of an ancient ecosystem - the vegetation and the food chain."

"Maybe with these fossils we can glimpse into the lost environment which gave rise to the dinosaurs."