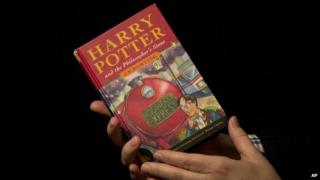 Harry Potter and the Philosopher's Stone has been named the 'nation's favourite' children's book.

The first novel in JK Rowling's series beat The Hunger Games and Roald Dahl's BFG in a vote run by Booktrust.

Around 24,000 people of all ages took part in the vote to decide which book was the 'ultimate' one to read before children turn 14 years old.

The Very Hungry Caterpillar was fourth and Winnie-the-Pooh came fifth.

JRR Tolkien's The Fellowship of the Ring came in at number seven.

Dr Seuss's The Cat in the Hat, Charlotte's Web by US author EB White and CS Lewis's Narnia fantasy classic The Lion, The Witch and The Wardrobe also featured in the top 10.

The Booktrust's head of arts, Claire Shanahan, said: "Kids and adults alike clearly can't get enough of Harry Potter. It's a worldwide phenomena - it has captured the imaginations of a generation of readers who have grown up in love with Harry or Hermione."

The titles were also grouped into age categories, and The Philosopher's Stone won in the 9-12 age group, while The Hungry Caterpillar was chosen as the ultimate book for children up to the age of five.