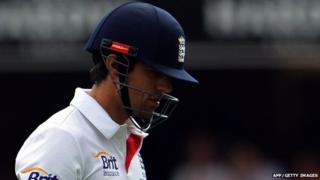 The England cricket team have suffered a huge defeat to Australia in the first Ashes Test in Brisbane.

England needed 561 runs in their second innings to win, but they were bowled out to lose by a whopping 381 runs.

Australian bowler Mitchell Johnson was named man of the match after playing a key role in beating England.

England's captain Alastair Cook said: "It is just one loss, it's a five-match Test series, there's plenty of time to fight back."

He added: "We need to now go away, regroup, stay strong as a unit, and really be honest with ourselves and how we go about trying to fight back in this series."