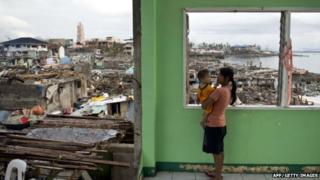 The UK is sending six new flights of aid to the Philippines this week to help survivors of Typhoon Haiyan.

Four cities are also be given a total of £5 million, taking the total amount of UK government aid to £55 million.

More than 5,000 people have died in the typhoon and many are still missing.

Watch Leah's report from the Philippines

She said: "There is the beginning of people clearing debris and the roads are now clear. But there's a huge amount left to do."