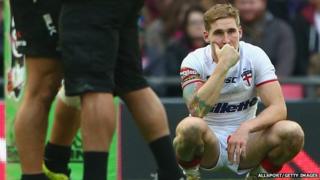 England have narrowly missed out on the Rugby League World Cup final, after a last minute try from semi-final opponents New Zealand.

The hosts were in the lead and seconds from victory when the Kiwis' Shaun Johnson scored to take the final score to 20-18.

It's the third time in a row England have gone out in the semi-finals.

New Zealand will now take on Australia in the final next Saturday at Old Trafford.