Is there too much pressure to look a certain way? 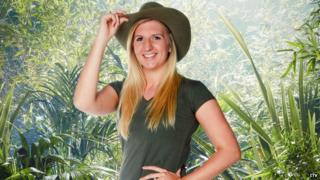 Rebecca Adlington has admitted on I'm A Celebrity... Get Me Out of Here! that she feels pressure over how she looks.

During a debate on the ITV show with other contestants about body image, the double Olympic gold medallist said she's 'insecure' over how she looks.

She said: "I was an athlete, I wasn't trying to be a model, but pretty much every single week on Twitter I get somebody commenting on the way I look."

"It's making young people like me very, very insecure."

Last year, a group of MPs released a report that said more than half of the British public has a negative body image.

Girls as young as five now worry about how they look, the MPs' report said, and it was images in the media of unrealistic bodies that were largely to blame.

We asked whether you feel there is too much pressure to look a certain way. You can read a selection of your comments below.

Nobody should be insecure about the way they look. Everyone is different. Rebecca Adlington is amazing at what she does and is a role model for all young athletes, she doesn't need to worry about her looks. Especially when she is pretty anyway! If you are being picked on because of your looks, tell someone and ignore it, you aren't the only one who is different!

Yes there is too much pressure to look a certain way. Who wants too look the same anyway?!

Ignore those who call you ugly. They are either jealous or just not very nice people. Nobody is ugly. People can actually say cruel things just to see you upset and it's not nice. It makes people feel self conscious and 'ugly' inside and out. Rebecca is very talented and naturally beautiful. Ignore others.

I think people should not worry about how they look but feel proud because when people are different it makes them interesting.

You're beautiful just the way you are!

It doesn't matter if you look different. It's good to be different.

To be honest she's a gold medallist it doesn't matter what others think of her. She's famous for what she does and not about how she looks. It's clear from her success that her body is in good shape so she doesn't need to change it.

I have acne, and I'm always worrying about how I look, but I don't really mind about clothes and shoes and stuff like that.

There is too much pressure to look good. Every girl cakes themselves in make-up to look good but they look worse then they did before.

I think natural models and people who look nice naturally are fine, but when people put the pressure on to look a certain way by starving and using pills and things isn't fair and very dangerous. I think Rebecca is very pretty, and that people may say mean things but they are just jealous because she is such an AMAZING SWIMMER!

I think there is pressure on the way you look because nowadays in magazines every picture has been edited. They are made to look like something totally different. They look thin, white, smooth skin and long necked, and everybody wants to look like pop stars and they are totally fake!

We think you're sooo talented and pretty. You shouldn't think that you are not pretty because you are. These people who make the comments are horrible and can't do better themselves. Those people won't have an amazing talent like you! We love you JUNGLE QUEEN 2013!

I think people should just be happy with the way they look. It doesn't matter.

I think there is definitely a pressure for girls and women to look a certain way because of the media and peer pressure. We all want to look like a model and be a perfect size!

People like me, 10 years old, are pressured by all sorts of things to change how we look. Most toys aimed at girls my age are now make-up sets and 'glam' kits. This makes me very uncomfortable and makes me have bad thoughts about myself, thinking that I should look better and more model-like.

Sometimes my mates laugh at me so yeah.