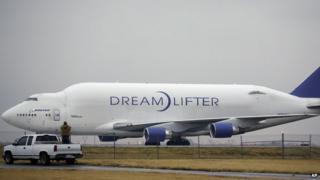 A 180-tonne Dreamlifter aircraft has accidentally landed at the wrong airport in America, and is struggling to take off again.

The plane was due to land at the McConnell Air Force Base in Wichita, but landed at an airport nine miles north instead.

The Dreamlifter is a modified 747-400 passenger aeroplane, which can carry more cargo than any aeroplane in the world. It is used to transport aeroplane parts around the world.