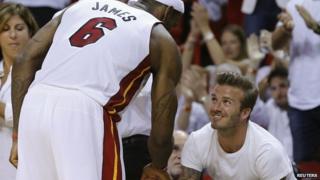 The Miami Heat NBA player is good friends with Beckham and thinks that Miami "is a great town for soccer".

Beckham has been looking to buy an MLS team since retiring from football in May, with Miami his preferred city.

Speaking to US newspaper the South Florida Sun-Sentinel, LeBron said: "David has become a good friend of mine. There's interest on both sides."

LeBron already has a small investment in Liverpool Football Club and said he has learnt more about football since becoming associated with the Premier League side.

LeBron James was fourth in a recent list of the highest-paid athletes in 2013 - Beckham was eighth.