Doctor Who facts: 50 fascinating facts about Doctor Who 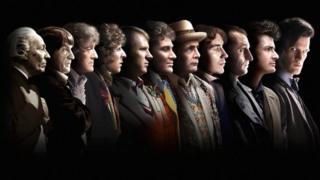 To celebrate 50 years of Doctor Who here are 50 fantastic, fascinating facts about one of the best-loved TV shows in history.

1. The original Daleks: The original Daleks were controlled from the inside by short operators who had to manipulate their eyestalks, domes and arms, as well as flashing the lights on their heads in sync with the actor's voices. John Scott Martin, one of the original Dalek operators, once said: "If you were related to an octopus then it helped!" 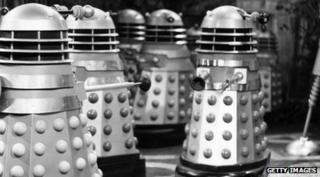 2. Title sequences: There have been around 12 different title sequences. The theme music was originally composed by Ron Grainer and created by Delia Derbyshire at the BBC Radiophonic Workshop. Since then there have been a vast variety of remixes of the theme music. Matt Smith (the 11th Doctor) even got up on stage at the 2010 Glastonbury Festival to perform a version of the music with the band Orbital.

3. Home: The Doctor has visited many different planets, but his home planet is called Gallifrey.

4. Medical doctor: The Doctor actually is a doctor! In a sickbay in the 1967 story The Moonbase, the Doctor was asked, "Listen, are you really a medical doctor?" He replied, "Yes, I think I was once, Polly. I think I took a degree once in Glasgow. 1888 I think. Lister."

5. Bow ties: "Bow ties are cool" - that's what Matt Smith said in his first appearance as the Doctor. Bow tie sales shot up by 94% within a month at one high street store! 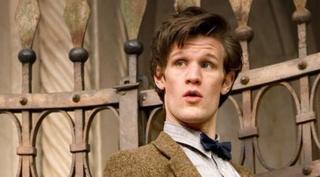 Matt Smith's Doctor wearing one of his trademark bow ties

6. Gadgets: The Doctor has an array of gadgets, including the sonic screwdriver - which has many uses including the ability to unlock almost anything - and the psychic paper, which can bamboozle people into seeing whatever the user wants them to see printed on it.

7. Red Nose Day: In 1999, a four-episode special of Doctor Who called The Curse of Fatal Death was made for Red Nose Day. It featured big name stars such as Rowan Atkinson (Mr. Bean), Richard E. Grant, Jim Broadbent, Hugh Grant, and Joanna Lumley as The Doctor.

8. Regeneration: The regeneration effect, used for when one Doctor changes into the next one, was created at the end of the first series by accident! A faulty mixing desk allowed the image of William Hartnell (the first Doctor) to be overexposed almost to white so that Patrick Troughton (the second Doctor) could be put in his place before the effect faded again. 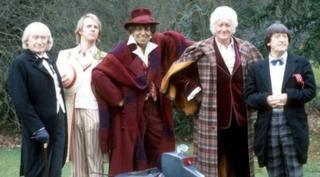 9. Multiple Doctors: The 50th anniversary episode will not be the first time more than one Doctor will have appeared in the same episode. For the show's 20th anniversary, a feature-length special called The Five Doctors was created, featuring the first five Doctors.

11. Sherlock-tor Who? The character of the Doctor was partly inspired by Sherlock Holmes. Comparisons have been made between the Doctor and the fictional detective. In fact both the fourth and eleventh Doctors have dressed up as Sherlock Holmes in episodes of Doctor Who.

12. The biggest fan: A six year-old-boy called Flynn was named as the UK's biggest Doctor Who fan after a nation-wide search by the Doctor Who Adventures magazine this year. He won the title as a result of his monster themed tea-party idea, and a letter explaining how much he loves the show. Both he and his twin brother would like to be future Doctors.

13. Celery. Yum! The fifth Doctor wore a piece of celery on his lapel because he was allergic to a certain gas in the Praxis Range. Once the celery turned purple he would eat it and it would save him. 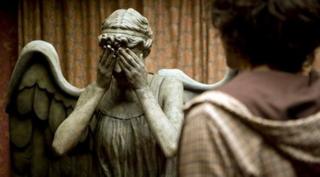 15. The Whomobile: (Not to be confused with the Batmobile) the Whomobile was a special vehicle created by the third Doctor and first appeared in the episode called Invasion of the Dinosaurs. It was capable of speeds of 105mph and even appeared on Blue Peter!

16. Matt's outfit: The original costume ideas for eleventh Doctor Matt Smith's look were very different from his iconic tweed jacket and bow tie. Some of the costume ideas included a buccaneer pirate-style one, which Matt wasn't very keen on.

17. Lost and found: The original pilot episode, which was thought to be lost forever, was rediscovered in 1978 in a mislabelled film can.

18. The key to the TARDIS: The distinctive TARDIS sound effect was originally created by simply rubbing the bass strings of a piano with a key. This sound was then modified by the BBC Radiophonic Workshop and then became the well-known sound effect that they still use variations of today!

19. Rewriting history: During his travels throughout time the Doctor has met and in some cases befriended plenty of historical figures, including: Leonardo da Vinci, William Shakespeare, Albert Einstein, Charles Dickens, Queen Victoria, Elizabeth I and Winston Churchill. 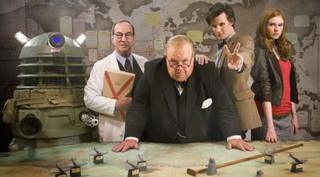 The Doctor and Amy with Winston Churchill!

21. Lady Doctor? When the original series was struggling with ratings in the 1980s, the show's co-creator, Sydney Newman, wrote a letter to BBC One Controller Michael Grade, suggesting some radical new ideas for the show, including the introduction of a Time-Lady (a female Doctor).

22. Most-watched episode: City Of Death featuring the fourth Doctor, scored the highest viewing figures of any Doctor Who episode in the UK, drawing in over sixteen million viewers. The second highest is Voyage of the Damned starring Kylie Minogue and David Tennant as the eleventh Doctor, which on its original airdate was watched by 13.31 million viewers, and as of November 2013 still has the highest viewership of any episode since the show's return in 2005.

23. TARDIS-teroid: Asteroid 3325, a main belt asteroid discovered in 1984, is named TARDIS after the Doctor's time/space machine.

24. The Young Doctor: Matt Smith is the youngest actor to play The Doctor, starting at 26 years old. 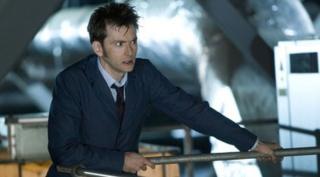 26. B&W Who: Before 1970 Doctor Who was filmed in black-and-white. Spearhead From Space was the first serial to be shot in colour.

27. Alien Doctor: Although Time Lords look human, they are aliens, and they have quite a few physical differences: the Doctor has two hearts, a "respiratory bypass system" that allows him to go without air for much longer than a human, an internal body temperature of 15-16C, and the ability to absorb, withstand, and expel large amounts of certain types of radiation!

28. Oldest friend: Jamie McCrimmon was the Doctor's longest-running companion appearing in 116 episodes. He helped the second Doctor to battle the Daleks, the Cybermen, Yetis and Ice Warriors.

29. The shortest stint: The eighth Doctor, played by Paul McGann, starred in just one feature-length episode of Doctor Who made in 1996, not a TV series. 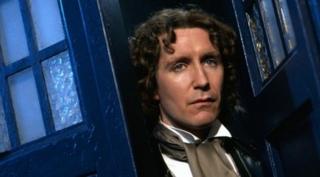 Paul McGann played the Doctor in 1996

30. Award-winner: In 26 years, between 1963-1989, Doctor Who only won two awards, a Royal Television Society award and a Writer's Guild of Great Britain award. However, the newly-revived series from 2005 onwards has received great recognition from critics and the public, winning over 120 awards, and being nominated for 230, including Baftas and NTAs.

32. Doctor/wife/daughter/Doctor/eh? David Tennant, who plays the 10th Doctor, is in real life married to Georgia Moffett, who is the daughter of Peter Davidson, who played the fifth Doctor! Not only that, Georgia also played The Doctor's cloned daughter in the episode The Doctor's Daughter.

33. The most fearsome enemy: First appearing in 1963 with the catchphrase "EXTERMINATE", the Daleks are considered one of the Doctor's most fearsome foes. They were even voted as the "greatest monsters in the galaxy" in 2010 by readers of the Science Fiction magazine SFX. 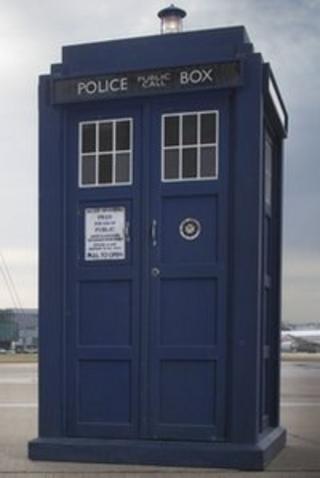 Why does the TARDIS look like a police box?

34. Dictionary corner: The words "TARDIS" and "Dalek" became so familiar to British audiences that they were added to the Oxford English Dictionary.

35. Hitchhiker's writer joined the team: Douglas Adams, who created the Hitchhiker's Guide to the Galaxy, also wrote scripts, and even became the script editor for Doctor Who in 1979.

36. The fourth is the longest: Tom Baker (the fourth Doctor) played the Doctor the longest, reaching 7 years, and starring in around 172 episodes between 1974-1981. His companions included Sarah Jane Smith and K-9.

37. Why the TARDIS is shaped like a police box: The Doctor's TARDIS has a broken "Chameleon circuit" which is supposed to enable it to disguise itself to blend into any environment. For example in ancient Rome, it might look like a Roman pillar or statue from the outside. However in the first ever episode An Unearthly Child, we discover that the circuit is broken and the TARDIS is stuck in the shape of a police box.

38. Breaking new ground: Verity Lambert became the youngest drama Producer at the BBC in 1963 when she accepted the role to work on Doctor Who. She was also the first woman to gain such a role in television.

39. Family ties: Caitlin Blackwood, who played the young Amelia Pond, is Karen Gillan's real life cousin. The first time they met was at an on set read-through, as Caitlin was born in Northern Ireland and Karen in Scotland. 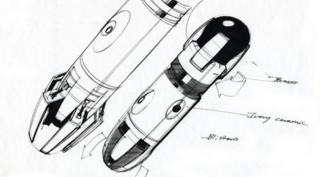 An early sketch for the 9th Doctor's Sonic Screwdriver

40. The sonic screwdriver: The iconic gadget first appeared in 1968, and was used by the second Doctor. It was then written out of the series in 1982 due to the limitations it caused when writing for the show. It then featured briefly in the 1996 Doctor Who TV Movie, before making a full return in 2005.

41. The opener: The first ever episode of Doctor Who, called An Unearthly Child, first appeared on BBC TV on 23 November 1963. On the same date this year the 50th anniversary episode will be broadcast simultaneously all over the world.

42. Record breaker: Doctor Who is listed in the Guinness World Records as the "longest running science fiction television show in the world" (with 798 episodes as of the 18th May 2013), and as the "world's most successful science fiction series", based on broadcast ratings, and sales.

43. The TARDIS: The acronym stands for Time and Relative Dimension in Space, and is The Doctor's chosen mode of transport for travelling through time. It is also bigger on the inside than on the outside.

44. One take: Many early episodes of Doctor Who were recorded in just one single take, so if the actors fluffed their lines, the others had to cover for them.

45. Villains and monsters: The Doctor and his companions have fought and encountered around 400 unique monsters/aliens/villains throughout the series, including The Daleks, The Cybermen, Weeping Angels and Ood.

46. Familiar faces: Peter Capaldi (The 12th Doctor) and Karen Gillan (Amy Pond) both previously appeared in the episode The Fires of Pompeii as side characters before gaining their roles later on in the series. 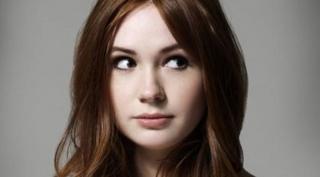 Karen Gillan played a bit part before being cast as Amy

47. 'Banned' in China: Doctor Who (and other television programmes and films featuring time-travel) are essentially banned in China, because the government authorities don't want to promote anything that could be seen as re-writing history.

48. The big scarf: The Fourth Doctor's iconic scarf was created by accident. The costume maker misunderstood her instructions for the scarf and knitted all the wool she had been given. However, Tom Baker liked the overly-long scarf, and went on to wear it for the show anyway.

49. The missing episodes: In the 1960s and 1970s the BBC would routinely destroy TV tapes rather than archiving them. The transmission tapes of 253 Doctor Who episodes were destroyed, as it was thought they had no future value. To this day, 97 of them are still missing, however copies are being found and recovered from all over the world.

50. Codename Torchwood: Tapes of the early episodes were codenamed Torchwood - an anagram of Doctor Who - to protect them from being stolen. The name was then an obvious choice for the later spin-off series.