Busted and McFly team up to form 'supergroup' McBusted 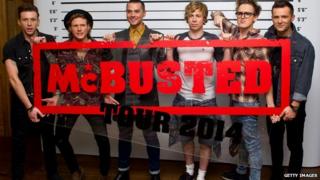 Boybands McFly and Busted have teamed up to create 'supergroup' McBusted.

McBusted's first performance as a supergroup will be on BBC's Children in Need on Friday and there are plans for a full UK tour in 2014.

Songs like Busted's "Year 3000", and McFly's "All About You" are planned to be included on their song lists.