How do we get girls to play sport? 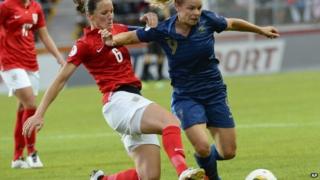 Sport for girls is under the spotlight today.

A group of MPs is concerned that it might not be as easy for girls to get into sport as it is for boys.

They also think there aren't enough female sporting stars on TV to inspire girls to get involved.

Today they're hearing evidence from women's sports organisations to examine why this is and what can be done about it.

It's after research from the Women's Sport and fitness foundation which suggests that girls start doing less activity than boys as soon as they're eight or nine, and nearly a quarter of women say school PE put them off activity for life.

I think that why girls don't want to play sports that they worry about getting bruises.

I am extremely sporty for example I do cross country for my school and was the only girl in the school who wanted to do this. I am also captain of the netball team. We should put more girls' sport on telly.

I play hockey and I really enjoy it so I don't understand why some girls aren't taking up sport.

I go to a girls school where they encourage us to do lots of sports. We also have many sports clubs and very good PE lessons

At my school I'm in an all girls group for PE. That means that I can't play rugby or football but the other group is boys and girls and they can play rugby and football.

I do an awful lot of for a girl including: athletics, netball and swimming. Girls need more inspirations.

Girls aren't as interested in sport because boy's sport is constantly in the spotlight. Men's football, for example, pays so many millions of pounds, whereas women's football pays nowhere near as much.

I think that we should encourage more girls to play sport by making it fun with games. I'm a girl but I'm really sporty but it makes me sad when I see girls moaning about having to play sport.

I think that some girls are less sporty than boys. However, girls do have a sporty side to them so perhaps boys are more competitive than girls. I think that this should change though, because it's not fair on girls.

The reason why fewer girls take sports is that normally girls are interested in fashion and girly stuff. The another reason may be that boys should start letting girls get involved in school and girls start going to sports clubs.

Girls would be encouraged to play if they saw more girls playing sports on TV and in the News. Also, schools need more money given to them so more sports can happen, for free, in schools.

I go to football training every Thursday night and not much girls go to it. My club does lots of things to get more girls going to training, like having fun coaches, trips and tournaments.

I think that we should encourage more girls to play sport by making it fun with games. I love sports like football, netball, tag rugby, hockey, gymnastics, boxing and loads more.