Armistice Day - what are you doing to mark it? 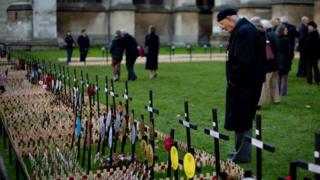 The anniversary of the World War One armistice - signed 95 years ago - has been marked in the UK with a two-minute silence.

The silence takes place every year at the 11th hour of the 11th day of the 11th month - which is when fighting stopped along the Western front in 1918, following four years of World War One.

Armistice Day honours the members of the armed forces who have served and died fighting for their country since that war.

We want to know if you have been doing anything in school to mark Armistice Day - or maybe you were involved in yesterday's Remembrance Sunday? Get in touch using the form below.