One Direction and Katy Perry scoop awards at MTV EMAs 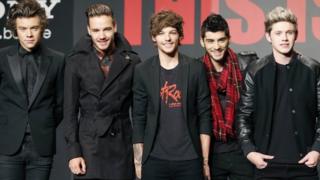 One Direction and Katy Perry are celebrating winning awards at the MTV EMA event in Amsterdam.

She said: "This is so cool. I was sitting backstage drinking champagne, looking at all those amazing artists, thinking I'm not going to win."

Justin Bieber took the Best Male prize, and Bruno Mars won the Best Song award for Locked Out of Heaven.