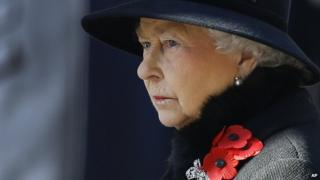 The Queen led the UK's annual Remembrance Sunday service in tribute to service personnel who died during conflicts.

A two-minute silence took place across the UK at 11:00am.

More than 10,000 veterans and civilians gathered at London's Cenotaph, where the Queen laid the first wreath.

Services took place at memorials throughout the UK, in Commonwealth countries and at military bases abroad.

At the Cenotaph, the Queen laid the first floral tribute followed by the Duke of Edinburgh, the Duke of Cambridge and Prince Harry. 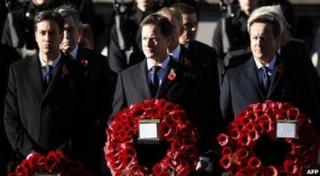 The leaders of the UK's political parties laid wreaths 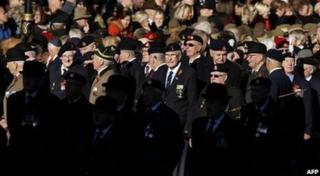 Veterans gathered at the Cenotaph 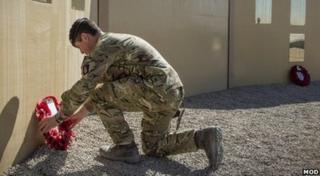 A ceremony was held at Camp Bastion in Helmand Province, with tributes lead by Prince Andrew, to remember 446 servicemen killed in Afghanistan.

Marching for the first time were 41 members of the British Resistance Movement - known as Churchill's Secret Army or the Coleshill Auxiliaries - volunteer fighters charged with going underground to continue the fight in the event of a German invasion of Britain in World War Two.

The Prince of Wales and the Duchess of Cornwall also marked the event during their official tour of India, joining the congregation of a Mumbai church for their annual remembrance service.

George Batt, national secretary of the Normandy Veterans Association who fought on D-Day, said Remembrance Sunday was a time for reflection.

"We'll be remembering all our mates that we left behind out there who paid the supreme sacrifice. And today, really, brings home the sadness of it all. And I must say, the stupidity of war," he said.