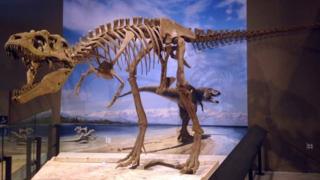 A new super-predator dinosaur that roamed the Earth 80 million years ago has been discovered in southern Utah in America.

It was closely related to its slightly larger relative, Tyrannosaurus rex, but it lived earlier, making it the largest living land predator of its time.

A full-grown adult would have been 30 feet (9m) long - about the size of a double decker bus!

It's been named Lythronax argestes which means "king of gore".

Randall Irmis, one of the team who discovered the dino, said: "It's always exciting to find new species but what's really significant is what these species tell us about their ancient world,"

"This was a very different place 80 million years ago. It was a very lush, wet, tropical environment and there were no polar ice caps at the time." 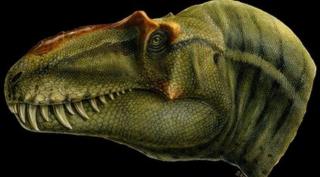 The new predator is related to the mighty T-Rex

•Lythronax belongs to a group of carnivorous dinosaurs called Tyrannosaurids, the same group as the T. rex

•Lived in the Late Cretaceous Period, between 95-70 million years ago