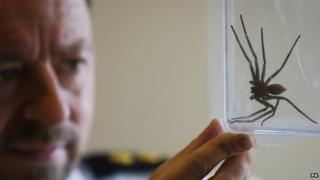 A giant spider common in Australia has been found in a UK BMX warehouse.

The seven-inch-long huntsman spider is believed to have been locked up for six weeks in a container from Taiwan.

Workers spotted the animal when unpacking boxes - and it's now been safely rehomed at a nearby zoo.

John Taylor, a BMX salesman at the warehouse, told Newsround: "We knew straight away that it wasn't a UK spider. We didn't want to kill it. We are happy that it is in a good home."

"We are talking about visiting him as a team," he said.

'Running around and jumping up'

Warehouse manager Joe Woodburn said: "It was as big as the palm of my hand. We managed to get it into a big plastic container where we kept it while we called the RSPCA.

"I thought it was plastic at first as it wasn't moving, but the minute it was in the sunlight it started to warm up and it was running around and jumping up the side of the box."

RSPCA inspector Zoe Ballard said: "I've never come across a spider like this before.

"I managed to secure the spider in the container and took it to the RSPCA's wildlife centre nearby... I was worried all the way that it would get out and escape in my van."

The spider has now been rehomed at Drusillas Zoo Park near Eastbourne.

RSPCA inspector Tony Woodley said: "Huntsman spiders can give you a nasty bite, but they aren't likely to cause too much harm unless you suffer an allergic reaction.

"They are not dangerous or aggressive, but can move extremely fast if disturbed. I am sure it would have given the guys in the warehouse a bit of a fright when they found it."