Mini-cars that drive themselves will be tested in a town in England within the next few years.

The electric-powered vehicles will travel at 12mph and carry people around on special pathways, in Milton Keynes.

The government has agreed to help fund a plan to get 20 of the pods, using drivers to begin with, working by 2015.

But by 2017 it's hoped there'll be 100 driverless versions, bookable using a smartphone app and which use special sensors to avoid bumping into things. 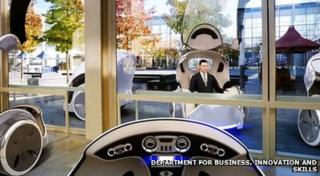 The pods will use sensors to avoid obstacles

There'll also be a number of 'apps' in the vehicle so passengers can browse the internet, check their emails, read a newspaper or play games.

The government says that if the scheme goes well the pods could be used in other towns and cities across the UK.

Check out: the researchers developing driverless cars for UK roads and the automated cars being tested in the US.