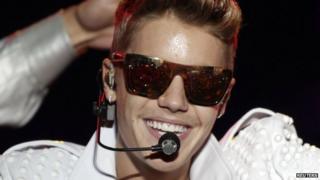 The Canadian singer could be fined after pictures appeared in local media that looked like he was painting a wall.

Defacing buildings is a crime in Brazil and punishments can mean up to one year in jail or a fine.

However officials described the case involving Justin Bieber as "a minor offence".

In a statement, Brazil's civil police force said Justin Bieber had been charged with "defacing a building or urban monument by graffiti or other means".

Brazilian media reported and published photos appearing to show the 19-year-old singer spraying graffiti on the wall of the abandoned Hotel Nacional.

The pictures showed him wearing a red cap and army pants - with a security guard on one side, a police car parked on the other.

Bieber had been granted permission from the authorities there to paint at a sports facility nearby, but members of his entourage claim he chose a different location to avoid his fans.

Police say the consent did not extend to any other places.