Olympic torch blasted into space ahead of Winter Games

An Olympic torch has been blasted into space as part of Russia's preparations for the Winter Games in Sochi next year.

A Soyuz rocket is delivering the torch to the International Space Station.

It blasted off at 04:14 GMT from the Baikonur cosmodrome in Kazakhstan. 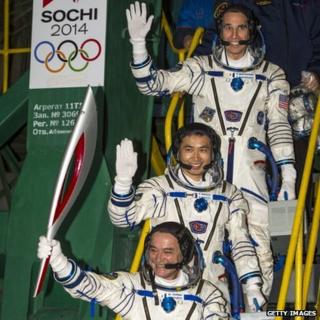 Russia's Mikhail Tyurin, American Rick Mastracchio and Koici Wakata from Japan - are taking the torch to the ISS

They'll be handing over the torch to fellow cosmonauts Oleg Kotov and Sergei Ryazansky, who are already on the orbiting station, then they go on a spacewalk on Saturday.

The Olympic torch has been carried into space twice before - in 1996 and 2000 - but it has never left a spaceship, so the Olympic torch spacewalk will be a first in the universe!

The torch won't be lit on board for safety reasons.

It will then return to Earth to continue its relay before the lighting of the Olympic cauldron in February.

Mr Kotov said: "Our goal here is to make it look spectacular,"

"We'd like to showcase our Olympic torch in space. We will try to do it in a beautiful manner. Millions of people will see it live on TV and they will see the station and see how we work."

The Sochi torch will then be returned to earth and used to light the Olympic cauldron in February next year.