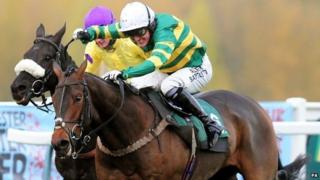 Jockey Tony McCoy from Northern Ireland has made history by picking up his 4,000th career win, about 1,500 more than anyone's managed over jumps.

He rode to victory in the second of his two races at Towcester in Northamptonshire this afternoon.

He's been crowned champion jockey 18 years running but the horse racing world has been on tenterhooks waiting as he edged closer to this record.

He picked up the record riding Mountain Tunes in the 3.10pm race.

The next closest jockey is Richard Johnson with 2,567 career wins.