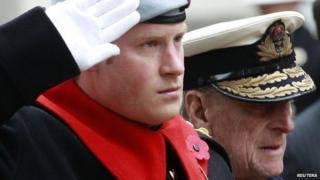 Prince Harry joined the Duke of Edinburgh on his annual visit to Westminster Abbey's Field of Remembrance.

The field remembers those killed during the First and Second World Wars.

The prince and his grandfather each laid a Cross of Remembrance in front of two wooden crosses from the graves of unknown British soldiers.

The Last Post was played followed by a two-minute silence, before the royals then met with war veterans. 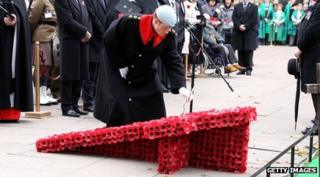 The Prince laid a Cross of Remembrance

This Sunday is Remembrance Sunday, when at 11am people all across Britain hold a two minute silence to remember the millions who have died in war.

Guide: What is Remembrance Day?

Meanwhile the Duke and Duchess of Cambridge joined poppy sellers at a London Tube station today.