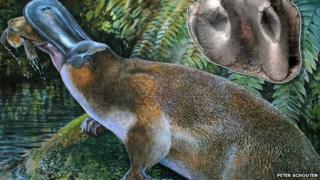 Part of a giant platypus fossil has been found in Australia.

Scientists have nicknamed the creature 'platypus-zilla' and say it would have been huge when compared to an ordinary platypus, measuring more than 1 metre long.

Tests show the creature would have lived between five and 15 million years ago.

Prof Mike Archer, from the University of New South Wales in Australia, said: "Suddenly up pops 'playtpus-zilla' - this gigantic monstrosity that you would have been afraid to swim with.

"It indicates there are branches in the platypus family tree that we hadn't suspected before."

Today, all that survives of this platypus is a single fossilised tooth, which was unearthed in the Riversleigh fossil beds in northwest Queensland.

Based on its size, the researchers have estimated that the new species (Obdurodon tharalkooschild) would have been at least twice as large as today's platypus.

Bumps on its teeth and other fossil finds nearby suggest that the creature feasted on crustaceans, turtles, frogs and fish.

Although the area where the molar was found is a desert, millions of years ago it would have been covered in forest. The researchers think the creature would have spent its time in and around freshwater ponds. 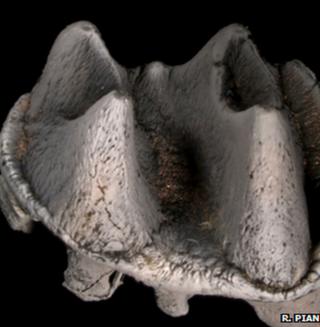 The platypus tooth that was found in Queensland

Prof Archer said that with just one tooth, it was difficult to work out exactly what this species would have looked like.

However other fossils suggest that it could have shared the same bizarre appearance as today's platypuses, with their duck-like bills, large webbed feet and poisonous spurs. But this would have been on a much larger scale.

Not many platypus fossils have been found and so researchers have difficulty getting a full picture of the creature's history.

Prof Archer said: "The discovery of this new one was a bit of a shock to us. It was a wake-up call that the platypus's story, the more we know about it, is increasingly more complicated than we thought."

The researchers are now hoping to find more platypus fossils in the same area to try and shed more light these unusual Australian animals.