India has launched its first rocket into space, with the aim of reaching Mars.

The unmanned robotic spacecraft is being sent to Mars to carry out experiments.

The Mars Orbiter Mission (MOM) lifted off at 0908 GMT on Tuesday 5 November from Sriharikota.

If all goes well, the spacecraft is set to travel for 300 days and should reach Mars orbit in September 2014. 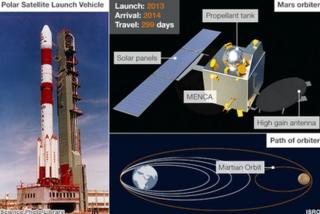 Prof Andrew Coates, from the UK's Mullard Space Science Laboratory, said: "I think this mission really brings India to the table of international space exploration." He also said that the Indian space team have chosen some interesting areas to explore.

These include searching for methane (CH4) in the Martian atmosphere, which has previously been detected from Martian orbit and telescopes on Earth. Scientists are interested in this gas because there's a possibility it is produced by living organisms on the red planet.

It's not easy to get a rocket to Mars, more than half of the attempts made by other space agencies have failed, but Professor Coates said the Indian rocket has a good chance of getting there.

Some people have questioned whether India should be spending £60 million on a scientific mission when the country has one of the highest rankings for childhood malnutrition in the world.

Nisha Agrawal, chief executive of Oxfam in India, said: "India is home to poor people but it's also an emerging economy, it's a middle-income country, it's a member of the G20. What is hard for people to get their head around is that we are home to poverty but also a global power.

"We are not really one country but two in one. And we need to do both things: contribute to global knowledge as well as take care of poor people at home."

Mr Radhakrishnan, chair of the Indian Space Research Organisation (Isro), said: "Why India has to be in the space programme is a question that has been asked over the last 50 years. The answer then, now and in the future will be: 'It is for finding solutions to the problems of man and society."

He also said that the space programme costs relatively little but has helped to make 'a great revolution' in the country.

If the mission is successful they will be the fourth space agency to reach Mars.