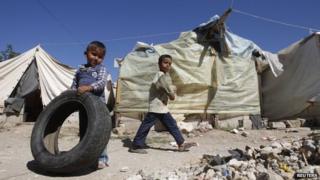 Around 9.3 million people living in Syria are now in need of help, says the head of humanitarian aid at the United Nations.

This is a big rise since the last time the United Nations released figures about the number of people in need.

Valerie Amos, who is the UN aid chief, says the crisis in Syria is getting worse and she's calling on the United Nations to take action to make it easier for aid workers to access the country.

Guide: It's ok to be upset by the news.