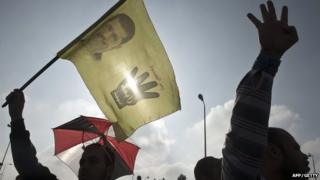 However, soon after it started the judge decided to put the trial on hold until January.

Morsi told the judge that he shouldn't be on trial and that he was still president.

He also refused to wear a prison uniform.

The judge had to temporarily stop the session today because of chanting in the courtroom.

The chanting came from other senior members of Morsi's political party, the Muslim Brotherhood, who are also on trial.

Morsi was removed from power by the Egyptian army in July in a move that divided the country.

He is accused of encouraging violence against the people who protested against his rule, along with 14 other members of the Muslim Brotherhood.

In August, protests by thousands of supporters of Mr Morsi were met with violence by the country's police force, leading to many hundreds of people being killed.

What is happening in Egypt?