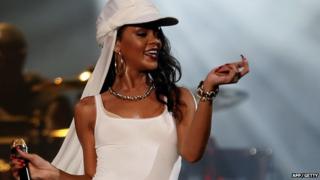 Rihanna has become one of just three acts in history to top the UK singles chart seven times over seven years.

The singer has stormed into the number one spot, as the featured artist on rap star Eminem's new track The Monster.

The pair held off a challenge from pop princes One Direction, who were tipped to have their fourth number one with Story Of My Life.

The Monster is Eminem's first number one hit since 2006.

A previous collaboration with Rihanna, Love the Way You Lie, made it to number two in the UK charts in 2010.

The new track is taken from his latest album Marshall Mathers LP 2, released on 5 November.