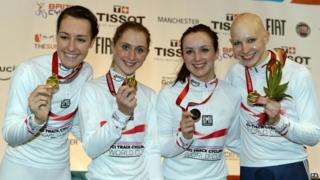 In the team pursuit, their new team not only won gold, but broke the world record....twice!