Should there be a tax on sugary drinks? 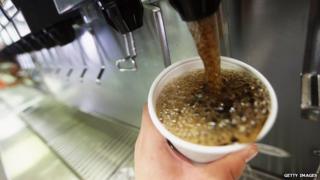 A 20% tax on sugary drinks would reduce the number of overweight people in the UK by 180,000, say researchers from the British Medical Journal.

Earlier this year doctors called for a soft drinks tax to reduce the amount of sugar in our diets.

It's because sugar-sweetened drinks, when drunk regularly, have been shown to increase the risk of obesity, diabetes and tooth decay.

But some groups say a tax is too simplistic, and would not help to improve our health. 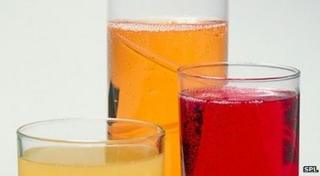 Fizzy drinks can contain up to 15 teaspoons of sugar

A 20% tax would add about 12p to the price of a 330ml can of fizzy drink bought in a supermarket or about 40p to the cost of two-litre bottle.

We asked you what you think.

Rubbish! Yes, kids are getting fatter but the government needs to do something else to reduce the nation's obesity record like more sports clubs. It is not fair for people like me who are sensible with the food we eat.

I think that there should be a tax on fizzy drinks as they contribute to bad health although I do not think it should stop there, other unhealthy things should be taxed too, like crisps.

I think they should put up the prices of sugary and isotonic drinks by a small amount so people don't drink them so much but so that they can still afford them as a treat. Schools should start educating young children what sugary food and drinks can actually do to your body.

NO WAY! If people choose to drink unhealthy drinks people should respect their choice. Nobody should stop people drink sugary drinks!

I think that putting a tax on fizzy drinks won't make a difference because its not about what you drink or eat its about how much you eat. People who aren't obese will have to pay extra for no reason.

If they want us to be healthier, they should just ban them!

I think there should be taxes on fizzy drinks, but only ones with high amounts of caffeine or sugar. However, there are other ways of keeping healthy besides this that are cheaper and easier.

I don't think they should put tax on fizzy drinks because people who really like them may pay anything for them and eventually become poor and that will be a whole other problem.

I think it would make no difference as my gran says if people want them then they will still buy them.

No way, I love drinking fizzy drinks and anyway we pay lots of taxes for houses, cars, insurance and energy bills. There should be taxes on chocolate instead.

There shouldn't be a tax on sugary drinks, people should be able to decide what weight they want to be, and what they should eat and drink.

I think that it wouldn't make a difference if it was just a few pence more. I have fizzy drinks when we go out but we sometimes buy coke for a treat and drink it at home. It would be healthier but I don't think people would be put off buying it.

No, parents take care of the intake of fizzy drinks so there shouldn't be a tax.

I think there should be a tax on sugary drinks because they are bad for your teeth and make them rot! I also think that education is more important so that they know how bad the drink is for their health.

I don't drink a lots of sugary drinks. I think they should put a tax on energy drinks because young children love drinking them.

No! We already pay enough tax and those people who actually aren't obese who have fizzy drinks will have to pay even more, including me!

I think there should be a tax but not that high because there are people like me who enjoy some pop once in a while but don't drink so much they are overweight.

Yes. I think so because I believe our country is getting bigger and bigger because of our food habits, we need to prevent this so we can have a happy, stronger, healthier country.

I think that the government is making a good move, because some people just can't take responsibility for their own health.

I think it would make more sense to reduce the costs of healthier options thus making them available and affordable to the general population. Reducing the cost of fruit and veg would greatly enhance the health of our nation. Perhaps the 20% tax added to sugary drinks should be deducted from healthier food and drinks.

Instead of putting tax on drinks there are other ways to stay healthy.

I do think it is a good idea to put a tax on sugary drinks but it is not just drinks that are making people obese, things like chocolate bars and sweets make people obese too.

Fizzy drinks are already really expensive without a big tax on them. If people are used to regularly getting fizzy drinks, they still will. It will only affect people who only get it occasionally (because of the cost) for a treat, but can no longer afford it.