How to act when meeting the Queen 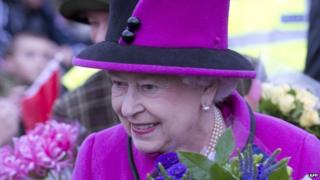 Recently a shop manager was accused of breaking royal protocol when she guided the Queen into a fish market in Newhaven, East Sussex.

From some angles, it looked like she may have touched Her Majesty's bright pink coat.

So how should you act if you meet the Queen? We asked her staff at Buckingham Palace...

Traditionally the Queen should only be touched through a polite handshake.

But last year Her Majesty surprised people by putting a friendly arm around Michelle Obama's waist at an event at Buckingham Palace.

The First Lady then returned the gesture by putting her hand on the Queen's shoulder.

There are no obligatory codes of behaviour when meeting the Queen but there is a tradition of courtesy.

This tradition says that men should give a neck bow and women should do a small curtsy. But others prefer to shake hands like they would with anyone else.

When you are presented to the Queen, the first time you address her you should say "Your Majesty" but after that you say "Ma'am".

There's a similar tradition for other members of the Royal Family. If you meet other royals you should first call them by the title "Your Royal Highness" and then in later conversation you can address them as either "Ma'am" or "Sir".

If you forget these traditions don't worry! The most important thing is just to be polite and enjoy yourself!