Firefighters to go on strike again in England and Wales 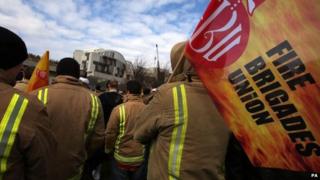 Firefighters in England and Wales will go on strike again in a row with the government about their pensions.

Members of the Fire Brigades Union will stop work between 6:30pm and 11pm today, and for two hours on Monday.

They'll still go to any major fires, but fire bosses advise people to put off home firework displays to Saturday night, or go to an organised event.

There have been previous strikes earlier this year as the row goes on, with the union concerned about government plans to raise the age firefighters need to retire.