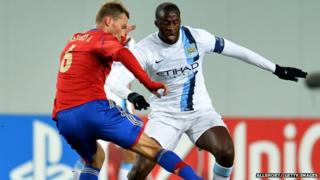 Russian football club CSKA Moscow have been punished after some of their fans chanted racist abuse at Manchester City player Yaya Toure.

Uefa has banned CSKA supporters from one section of their stadium during the club's next Champions League tie.

The Russian club was charged after Toure complained about the chanting during the match on 23 October.

CSKA denied that Toure had been abused by fans but Uefa charged the club after a hearing in Switzerland.

They said: "The European governing body has a zero-tolerance policy towards racism and discrimination on the pitch and in the stands."

Earlier this year in May, Uefa announced that in cases of racism involving spectators, they would enforce a partial stadium closure and in the event of a second offence, a full stadium closure, along with a fine of 50,000 euros (£42,800).