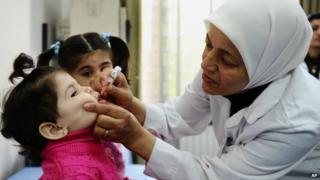 The World Health Organisation say there's been an outbreak of the potentially deadly disease polio in Syria.

They confirmed ten cases of Polio have been identified in young children, the first time in 14 years that the disease has been found there.

Before the war began in 2011, around 95 per cent of children were vaccinated against the disease but now it's thought 500,000 children have not been immunised.

The infection, which is spread through dirty water, attacks the body making sufferers disabled and in worst cases can be deadly.

The charity Save the Children say they want the fighting to stop so they can get access to the country to carry up widespread vaccinations.

In developed countries Polio is very rare or non existent but its still common in poorer countries like Nigeria, Pakistan and Afghanistan.