World Cup finals could increase from 32 to 40 teams 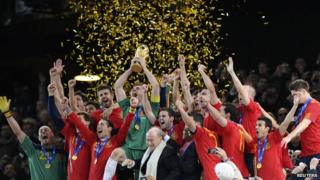 The number of teams playing in the World Cup finals could be expanded from 32 to 40.

The head of European football Michel Platini says that's the best way of getting more Asian and African sides involved.

He says: "You have three days more of competition and you make more people happy."

The number of teams in each group would change: so instead of eight groups of four teams, there'd be five per group.

The number of teams playing has changed before.

Fifa President Sepp Blatter - who'll actually make the decision - had previously suggested reducing the number of European teams instead, to help the number of African and Asian teams competing.