What is Down's syndrome?

On 21 March, people across the globe will be marking World Down's Syndrome Day.

It is a day to raise awareness of the genetic condition.

This year, the theme of World Down's Syndrome Day is leave no one behind, to promote support for making sure that people with the condition have the opportunity to live as fulfilling lives as anybody else and are treated equally.

Read on to find out more about the condition and let us know in the comments if you're doing anything to raise awareness today!

Was this the greatest accident in medical history?

What happens when you sleep?

What is Down's syndrome?

It is not a disease, an illness or a condition that someone can catch.

How does Down's syndrome affect a person?

People who have Down's syndrome have different personalities and abilities to each other, just like anybody else.

People may also share common physical characteristics (for example, a smaller mouth and one individual line across the palm of their hand), but they will look like their parents just like anybody else.

Individuals with Down's syndrome may be more likely to have some health problems - for example, with their hearing - so children with the condition might go to the doctor a little more often to keep on eye on their health. It can also cause speech problems, so a person might have speech therapy to help with this.

The majority of people with the condition walk and talk, go to ordinary schools, play sport if they wish and lead a fairly typical life.

The Down's Syndrome Association explains: "The level of support that a person with Down's syndrome needs as they grow older will be different from person to person."

How common is Down's syndrome?

About one in every 1,000 babies is born with the condition. There are currently about 60,000 people in the UK with Down's syndrome. 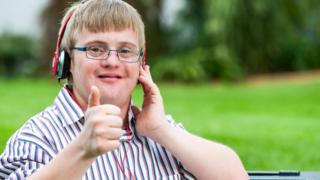 Getty Images
About one in every 1,000 babies is born with the condition

It is a little more likely for a woman to have a child with Down's syndrome if she has a baby when she is older.

It occurs completely by chance in all races, in all countries across the world.

Down's syndrome is a genetic condition, which means it is caused by something in a person's genes. 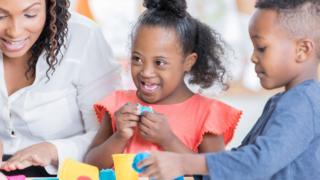 Getty Images
Down's syndrome occurs completely by chance in all races, in all countries across the world

Our bodies are made up of billions of tiny cells, and each cells contains genes. Genes are grouped together in structures called chromosomes.

Genes contain important information that determine features like our eye colour and whether we are a boy or a girl.

Usually, cells contain 46 chromosomes. But Down's syndrome happens all or some of the cells in a person's body has 47 chromosomes due to an extra copy of chromosome 21.

This is why you might also hear the condition being called trisomy 21.

There are three types of Down's syndrome:

Someone called Professor Jerome Lejeune proved that this is what causes Down's syndrome in 1959. 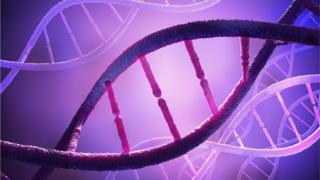 Down's syndrome is named after Doctor John Langdon Down who first published information about the condition in 1866.

Since then, we've learned a lot more about the condition.

Are you doing anything to mark World Down's Syndrome Day? Let us know in the comments below!