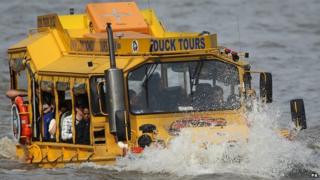 "Duck tour" boats should be banned until safety problems are solved, according to the Marine Accident Investigation Branch.

Duck tour boats are amphibious buses that can drive from dry land straight into water, where they turn into a boat.

There have been two major accidents involving the vehicles this year.

Many duck tour boats are old vehicles from World War II, converted to carry tourists on the tours.

It's possible that not all of the boats have been converted safely.

On 15 June a duck tour boat sank in Liverpool, and on 29 September one caught fire in London.

In both cases investigators have blamed buoyancy material for the accidents: "The link between both events is the foam inserted... to provide buoyancy".

Captain Clinch said the duck tour boats should be banned until "safe operation" could be guaranteed.