What's the point of curved smartphones? 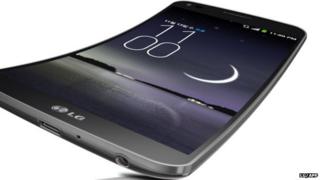 Despite its name the G-Flex does not bend, but has a display which is curved from top to bottom.

LG says the curve helps the phone follow the shape of your face, putting the microphone closer to your mouth.

Why would anybody want a curved smartphone?

"Curved smartphones are a bit of a gimmick at the moment," said Newsbeat technology reporter Jonathan Blake.

He told Newsround: "They could be more comfortable to hold and companies claim the curved screen makes watching video more impressive."

"But apart from that the phones are very similar to other smartphones."

Tech rival Samsung revealed its own curved smartphone on 9 October. It wakes up from sleep mode when you rock it forwards.

But both smartphones are only going on sale in South Korea for the time being.

Jonathan said: "Technology companies need to keep up interest in their products and curved smartphones attract a lot of attention."

"But the fact they're only available in one country at the moment suggests the companies making them are not convinced they will take off."