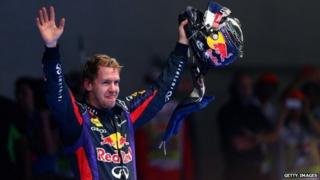 The German is the only the fourth man to become a four-time champion, after Juan Manuel Fangio, Alain Prost and Michael Schumacher.

"It has been incredible to race some of the best drivers F1 has ever had."

Vettel sealed the 2013 championship with victory in India, his 10th win in 16 races so far this season.

The 26-year-old has won six races in a row and if he wins the remaining three races of the season in Abu Dhabi, the United States and Brazil he will equal the record for consecutive wins in the F1 world championship, set by Italian Alberto Ascari 60 years ago.