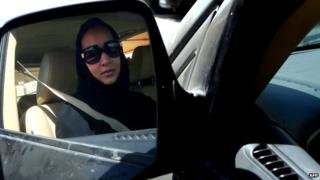 Around 60 women in Saudi Arabia drove cars on Saturday despite being warned they could be arrested.

Although it's not against the law for women to drive in Saudi Arabia, the country's Islamic establishment enforces a ban.

Women can't get a driving licence, so some women travel abroad to get one.

It is the law in Saudi Arabia that every woman must have a male guardian. This is often a relative or the woman's husband.

A guardian goes everywhere with the woman and traditionally gives her permission to do things like open a bank account.

Some people think women don't need to drive, because they don't travel without a man who can drive for her.

Campaigner Manal al-Sharif thinks women are banned from driving because allowing women to drive may threaten the guardian system.